Rudder 4.0 changes for good the way we see IT management

Here we are! After months of hard work, nourished by years of feedback from the community and our clients, Rudder 4.0 is out. What makes this version so special we felt it deserved its own epic version instead of pursuing towards a more discreet 3.3? Because this new Rudder not only improves its longstanding components, but also adorns itself with disruptive new features that challenge the way IT infrastructure has been managed so far. 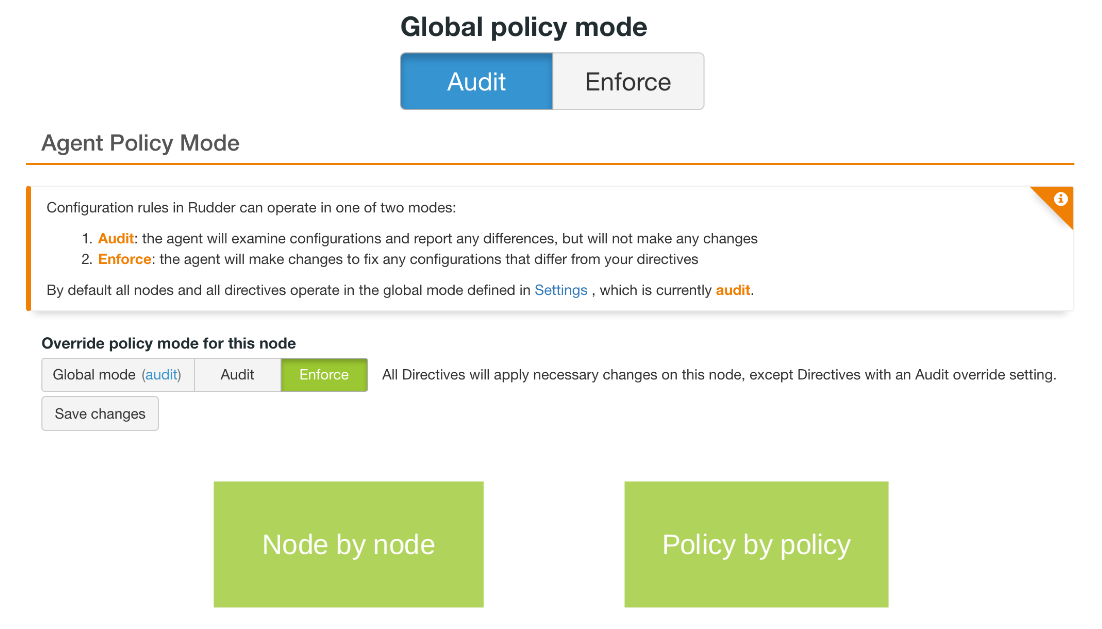 The main new feature in Rudder 4.0 is the "Audit" policy mode, in addition to the existing "Enforce" one. Both work autonomously and continuously on your managed nodes, but the new Audit mode allows to only check your policies without ever making any changes on your servers.

Audit mode can be configured globally, if you intend to use Rudder to check compliance drift and report on it. The global policy mode can be configured to be overridable. In that case, you will be able to configure policy mode on a node and directive basis. This is the perfect way to add new nodes to you Rudder managed infrastructure and only see what would happen to them before actually commiting changes, or do a dry run test of new configuration without threatening your production environment.

A lot of attention and several safeguards have been put in place to ensure that if you choose to use "Audit" for a target, nothing will be changed on the node for that target (except Rudder's own configuration under /var/rudder).

From a technical point of view, the configuration and compliance assessing of Rudder was greatly improved in Rudder 4.0 to accomodate the new Audit policy mode:

Future versions of Rudder will take advantage of this feature to enable ramp up deployment of new configurations, where your changes are gradually deployed in Audit mode and based on the feedback given by the compliance of that audit mode and configured thresholds, either automatically changed to "Enforce" or outliers are reported for human review.

Global redesign of the web interface 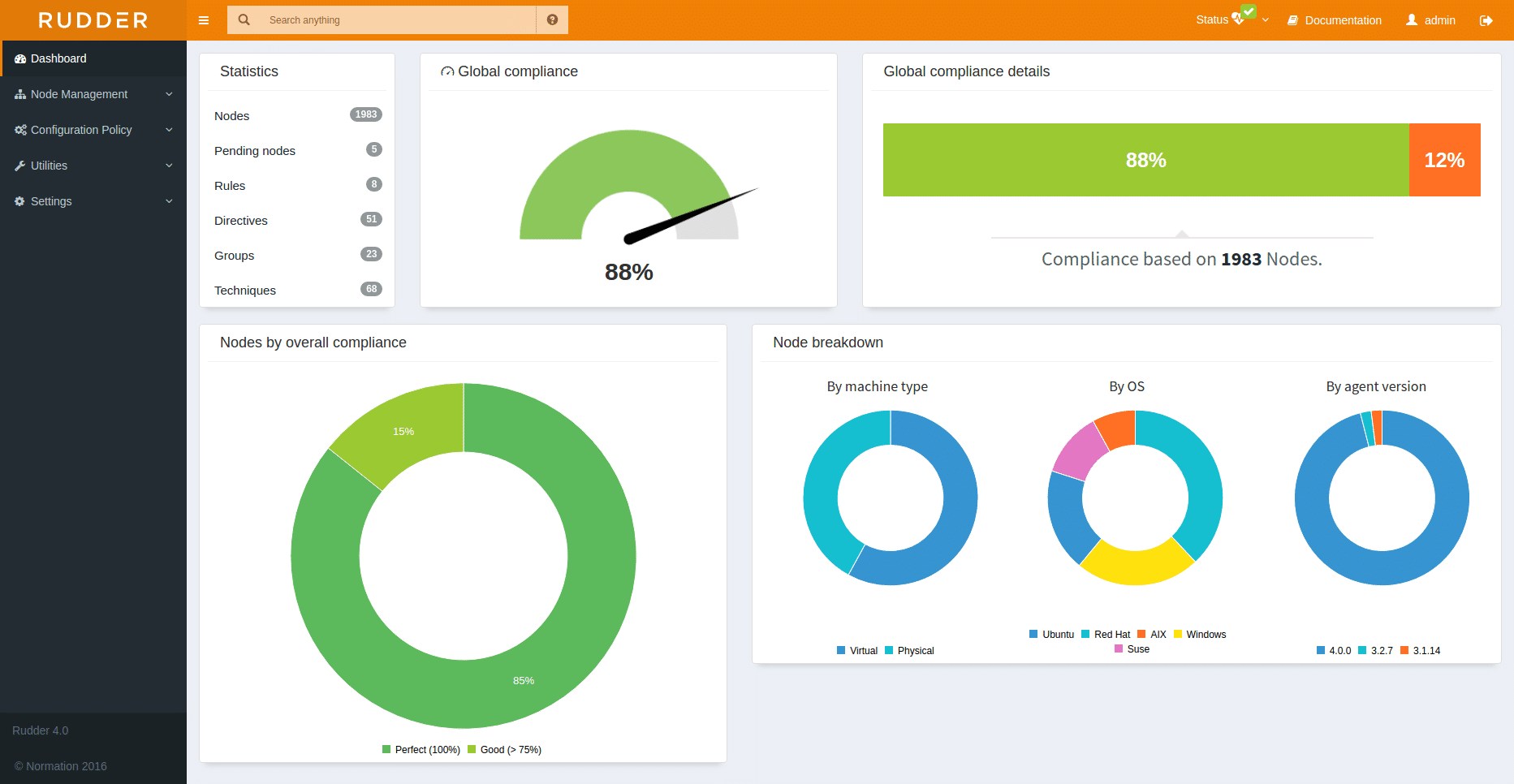 Rudder's interface hadn't changed much since its version 3.0. It was beginning to age, while Rudder continues to offer revolutionary features. Version 4.0 was therefore the perfect opportunity to rejuvenate Rudder offering it a new, more modern and responsive, design.

Files from shared folder can be selected using a file browser 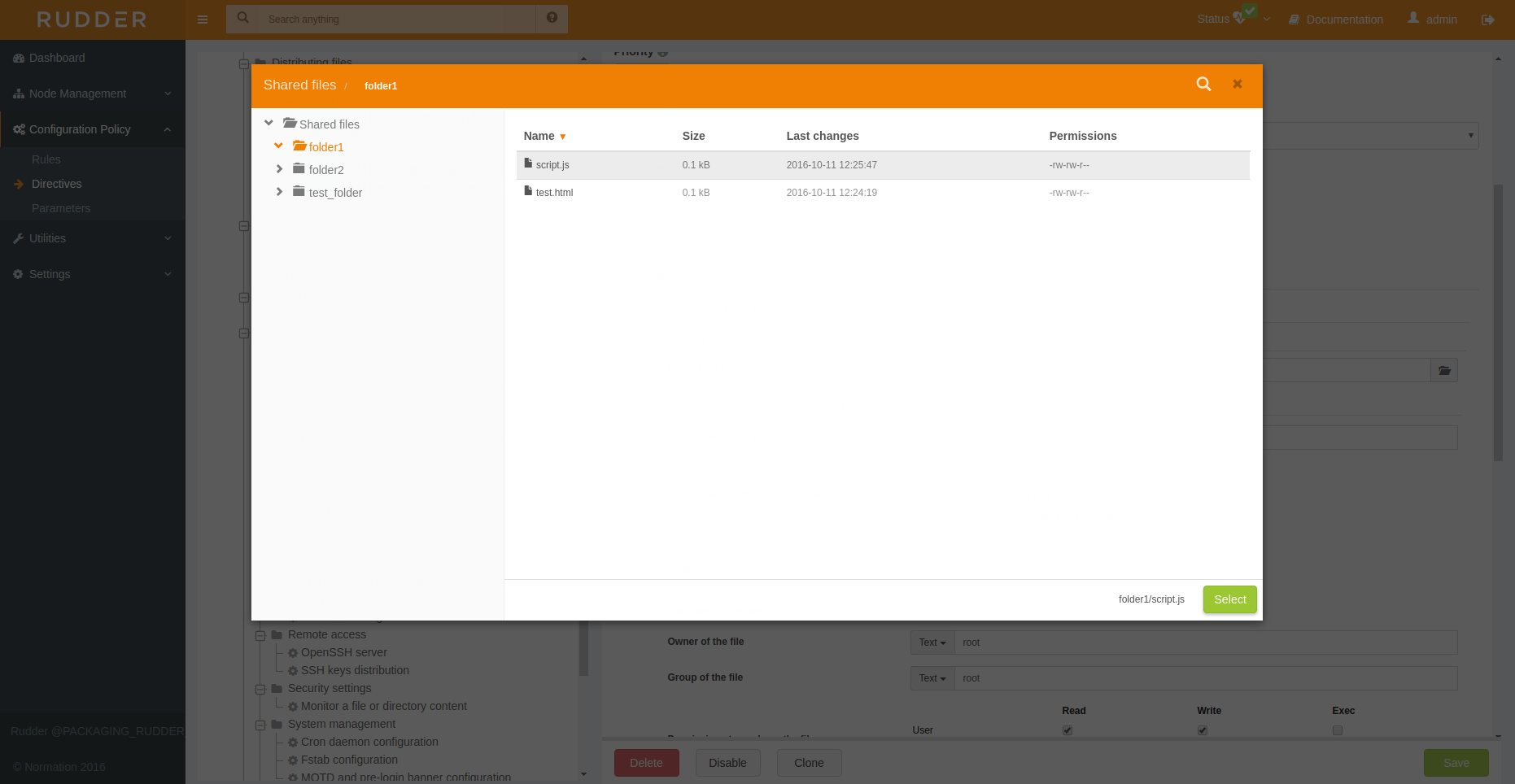 Agents can be remotely launched via API

Remote execution of agents on a remote nodes, from the Rudder server, allows to force new rules application immediately, or to check compliance of one or several systems instantaneously.

The command "rudder remote run" lets you remotely run the agent, but that requires being logged in to the Rudder server, and cannot be automated easily. This is why we added an API call in Rudder 4.0 to run agents on one or all nodes via the API, and to allow for scripting these calls, or integrate them with other tools.

When called on a node, the API returns the agent output, and a summary of the run.

If no NodeId is given, all nodes will be contacted asynchronously, and the only information outputed is the list of nodes on which the agent will be executed.

What are we talking about ?

The file transfer protocol used for both copying policies and explicit file copies from the server to a node (including via relay servers).

The authentication mechanism used to allow accessing the policies and shared files has two levels:

The "classic" file transfer protocol used plain text by default with the ability to encrypt file transfers by configuration.

ACLs were managed using IP addresses and hostnames. By default, this required having working reverse-DNS resolution to improve authentication of nodes. This lead to several issues:

We changed the protocol to use a TLS session. That means everything is now always encrypted.

We also added new key-based ACLs in the server configuration. These are evaluated first, which means all nodes will use them instead of the old ACLs, except any nodes with agent version 3.1 or 3.2 running on initial promises - these will switch to key based authentication as soon as they received generated policy from a Rudder 4.0 server.

This will allow getting rid of all DNS/hostname issues in node-server communication and improve the security level once old ACLs are removed.

How to use it? Is it backwards-compatible?

There is nothing special to do. Everything is almost compatible, except when using a 4.0 agent when the server cannot resolve it (for example behind a NAT) with a pre-4.0 server, because the server does not have the key-based ACL, and the new protocol does not support the option to skip hostname validation, so these nodes may not be able to communicate with the server.To avoid these issues, the recommended upgrade process is to upgrade the server before the nodes in any case. This will ensure a smooth migration and avoid any compatibility issues.

What are the next steps?

We will progressively remove the old protocol and ACL system. This will likely be an option in the settings soon, and will be completely removed when dropping compatibility with 3.1/3.2 (which can not happen before the next Rudder ESR version is chosen and 3.1 reaches EOL).

On large installations, with several thousand nodes, compliance computation could get quite slow (several minutes to display a list of 7000 nodes with their compliance), and policy generation took a really long time. To improve both of these points, we changed the database schema, the way we handle compliance, and the policy identification in Rudder 4.0.

Expected reports are now stored in JSON in database, per node, instead of spread over several tables, and grouped per rule. This change greatly simplifies the compliance data handling and computation, and more so on very large installations. Indeed, all complex queries to fetch compliance details have been removed, and on our test platforms, compliance computation is twice as fast on a setup with 1000 nodes.

The previous data model caused a dependency between all the target nodes of a given configuration rule: a change on a node could trigger a policy generation for all nodes (with the extreme case of accepting a new node which caused a complete policy generation on all nodes). In Rudder 4.0, this dependency has been removed thanks to the previously described change, and with a new unique policy configuration ID per node. Adding a new node only triggers a policy generation for the new node and its policy server in Rudder 4.0, which represents a massive improvement on large installations.

This evolution is the first step toward a new policy generation system, which will be node per node in the future, with a validation on the node-side rather than server-side, to allow for fast policy generation, regardless of the number of managed nodes.

We continued the work making the rudder CLI command ever more useful.

First let’s have a look at new agent commands:

The last two options need a direct connection to the server with an API token to work - provide this with the -t option or in ~/.rudder.
This command doesn’t work yet for nodes that are behind relay servers and not directly reachable via a network connection on port 5309 from the server - but this is a work in progress for 4.1.

On the server side, we now have:

Rudder Rest API allow you to control and integrate with Rudder without using the web interface and gives you the possibility to automate complex tasks that would take a long time to achieve otherwise. It’s quite complete, but there were still some items that you can’t manage, like the general settings of Rudder.

There are several types of parameters:

There are still some Settings (authorized networks, database cleaning …) that can’t be managed yet, but they will be included in the REST API soon.

Another next step will be to rebase our settings page on this new API so we can have a more reactive interface, that will be easier to maintain. We have already done this for the new Policy mode setting (Audit/Enforce) form in General Settings page.

Rudder 4.0 is available now. Here are a few easy ways to try it out: