Hello folks, 2015 starts with a lot of new promising changes for Rudder!

The main features of Rudder 3.0 ‘Galleon’ are:

We want to provide the best user experience as possible with Rudder and as of 2.11, there are a lot of things we can improve.

Before Rudder 3.0 we had a static page as a homepage for Rudder. We found that it didn’t include enough informations, so we enhanced it.

To improve this page, we created a dashboard containing informations about your whole IT (global compliance, how the compliance is distributed between Nodes, OS Distribution…) and still providing access to every parts of Rudder (Rules, Directives).

We hope that our new dashboard will now be frequently used to have a global view over your system and help you master it.

We replaced the previous header menu with a new navigation menu which is very small, making a lot more space for content viewing. 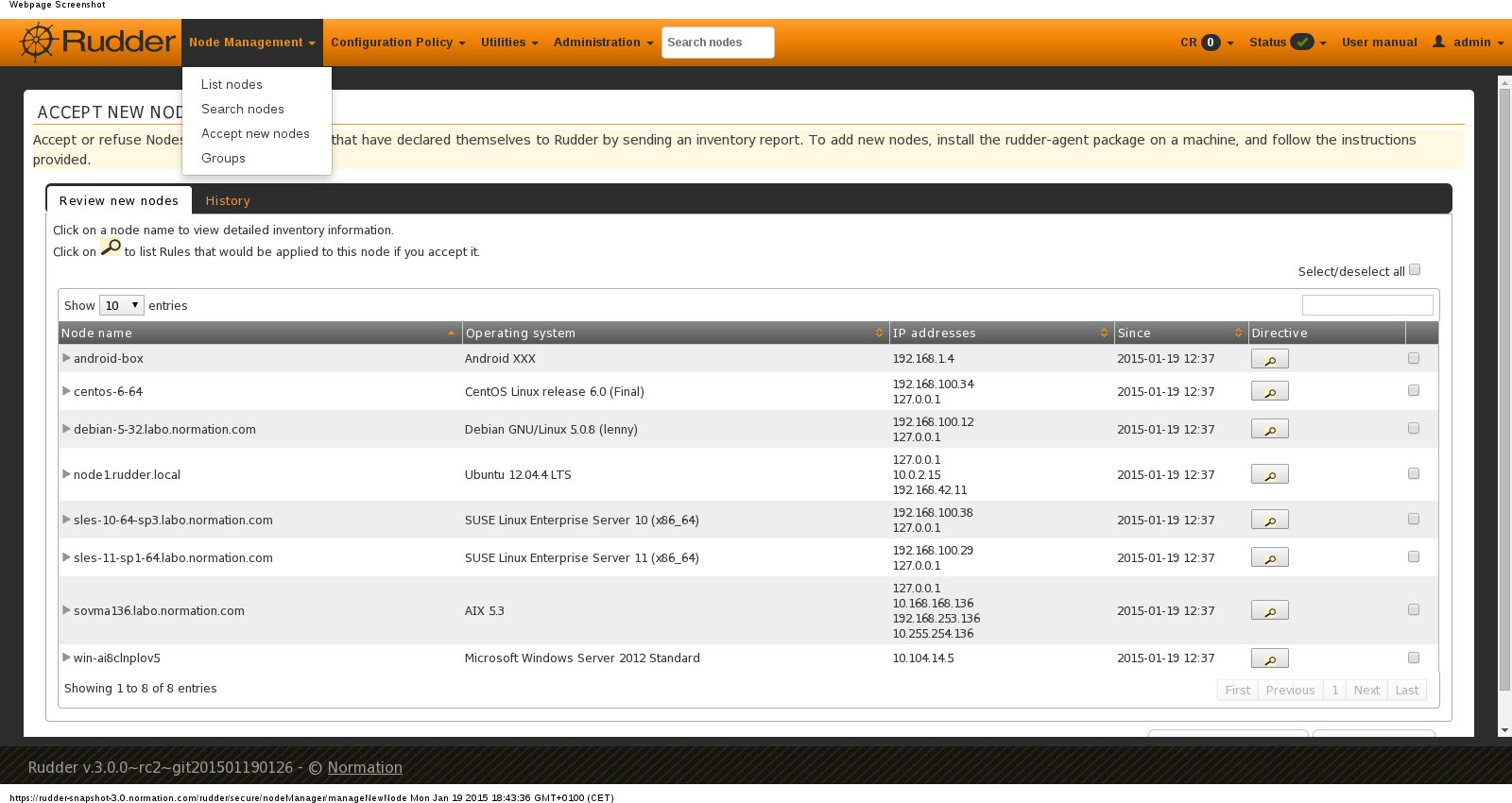 The menu provide access to all pages of the webapp, contrary to the old version in which you had to click several times to access all of them.

It also display several informations on the global status (number of change request, status of policy generation, and user logged in)

The header menu is always visible so you don’t have to scroll up to change of page.

Rudder’s main pages contain everything you need, so we did not add new informations there. However, we reorganised them to greatly improve user experience:

We want Rudder to provide you as much feedbacks about compliance of your IT as possible.

The previous compliance definition only counted full success reports towards compliance whereas the new version also counts partial success. That’s why we replaced all compliance percentage by a progress bar, showing a detailed state of your compliance instead of a partial information.

In one look, you will understand how much your IT is ok (green part), in error (red), have not answered (blue, orange). So you don’t have to look deeper to understand what’s going on.

You can see the detailed bars on Node reporting (tab “Reports” in a Node details) for each Rule applied to a Node. A compliance bar is also displayed for every Rule in the table so you clearly see which Rule is not correct directly.

Next to that bar you can also see a small graph, that graph represents the how many changes (repaired reports) there was on that Rule over the last 3 days, so you can now see Rule activity.

But we added two new sections:

Last but not least, a global compliance overview is now available on the dashboard on the home page, in one look, you can now see if there is a problem.

That’s a lot of changes for Rudder web interface in 3.0, and we haven’t talked yet about the new features we added!

When maintaining an infrastructure using Rudder, you sometimes have to debug a Node and run commands on them to understand what’s going on. We identified the most common command used and we regroup them in one tool: rudder agent CLI.

On a node simply run:

We’ve got a lot of information about Nodes managed by Rudder through the inventory, but the inventory only contains hardware/software characteristics, and sometimes you need to personalize informations about a Node (department/country/environment… whatever your want).

This could be done before via environment variables and create groups based on that variable but this was not very handy.

In 3.0, we added the possibility to add custom properties to Nodes via Rudder API rest: http://www.rudder-project.org/rudder-api-doc/#api-Nodes-updateNodeProperties

To add some properties on a Node just run (here, shell and env_type):

Then in rudder web interface you can create groups based and those value, and consult them on the Node details page (tab “properties”).

Use environment variables as parameters

Sometimes you want to have node specific values, but parameters are only globally defined for now and usage of cfengine variables is rather complex (see https://www.mauras.ch/rudder-fun-with-variables.html).

We now allow to access locally defined environment variable in Directive and Techniques. They are accessible using ${node.env[NAME]}, where NAME is name of the variable (warning: case sensitive)

To compute compliance, we need to have reports from Nodes. Dozens of reports are sent at every agent run. When you have few Nodes (< 200) with a correct network, that’s not a problem. But when you’ve got a lot of Nodes, your network can become saturated with those reports. Same thing when your Nodes are on a low speed connection, you don’t want it to be completely used by rudder agent.

We want to provide an alternative to that mode, requiring far less bandwidth, by only sending changes (when state on the node is modified) and if nothing happens in a long time, send a signal to tell the server the node is alive (we call that ‘heartbeat’)

An entry in the Settings page is available to change of compliance mode.

When you select ‘change-only’ you must define the interval between two heartbeat sending.

You can now have specific value for agent run for a node, overriding the global value. This can be useful when you want to ensure your compliance on a critic node, or reduce bandwidth usage on some isolated node.

We are maintaining some Techniques for a long time, and we have release several versions for each of them. The latest version have less bugs and more features, and should be used when possible. In 3.0 we added a possibility to deprecate old technique versions. They will still be available for you to use in 3.0, but we encourage you to migrate to latest version before upgrading to a next version (3.1).

Directive using an old technique version are now highlighted with a small icon, and we improved the migration process (it’s now in the directive edit form).

As stated in the abstract, we added support for new OS (Debian8, RHEL7) and our techniques are now systemd compliant. So we now have support for:

We also improved A LOT of performance from the webapp:

So Rudder 3.0 is the fastest Rudder that you will ever have

We hope that you will have a better experience while using that new UI and we are really looking forward to hearing your feedback about it!